SMB Client : Hello!  Can we talk?  I speak a dozen different dialects!  Pick one!

SMB Server : Oh, sure!  How about German?  I speak that the best.

SMB Client : English it is, then!

SMB Client : Can you handez-vous das datei over yonder, señor?

SMB Server : There's something seriously wrong with you, kid.

Posted by Samrobb on 7/29/2016 No comments:
Email ThisBlogThis!Share to TwitterShare to FacebookShare to Pinterest
Labels: Personal, Software

So... taking Eldest Daughter to her SAT prep class this morning, the topic of My Little Pony came up.  (I'm the father of three girls. Don't judge me.)

Specifically, I was wondering - where are all the male ponies?

The Alldaughter pointed out that there's Big Mac, of course. There's also some male ponies - royalty, mostly - in Canterlot, and a few others. But the majority of the inhabitants of Equestria seem to be female.

"It's a show for seven year old girls, after all," she said.

Which kind of surprised me. I mean, there's one situation that immediately came to mind when I though about the lack of males hanging about...

A war so brutal that it has sucked up just about every remotely qualified male pony in Equestria into its unforgiving maw of death and destruction. A war so unforgiving that only the mentally deficient, the elite, and the infirm can keep from being drafted to serve. A war so horrifying that those left behind cannot even bring themselves to make mention of it, instead carrying on as if life was sunshine and roses.

Which got me thinking...

We know that the ponies can perform magic. They are also able to move between certain locations in Equestria and our world; and when they do, they do so directly. Their males are drafted to serve in a relentless war that those who remain behind dare not speak of.

Who else knows of a hidden, relentless war taking place in a realm just a hop, skip and a jump away from our world?

Equestria is located in the Nevernever.

The strongest of their population - the male ponies - are off at the Outer Gates, fighting and dying in Mab's endless war to keep all of creation safe from the Outsiders.

Ah-yep. I just shoehorned MLP:FIM into one of the most epic storylines of modern urban fantasy.

"For Avoidance of Doubt"

Ruthlessly stolen from a friend's Facebook post, because he's far more eloquent than I am. Some advice for both Democrats and Republicans who wish to discuss politics with me in this election season:

If you're interested in talking to me about the issues that matter to you, it will help your cause if you refrain from assigning me the role of villain or hero on the basis of my demographics.

For avoidance of doubt:

I think I may need to get these printed up on a business card.

Posted by Samrobb on 7/27/2016 No comments:
Email ThisBlogThis!Share to TwitterShare to FacebookShare to Pinterest
Labels: Politics, Win

From a friend's wall of the Book of Faces, where the topic of discussion is the current DNC train wreck. A fellow who I presume is a Democrat commented:


"I'm having a hard time digesting some of what I've seen from people who are supposed to be in the same party as me."

Dude. Welcome to the club.

We're looking for a name. How does "Libertarian" sound to you?

Posted by Samrobb on 7/25/2016 No comments:
Email ThisBlogThis!Share to TwitterShare to FacebookShare to Pinterest
Labels: Politics, Snark

What Is The Sound Of No Man Posting?

On Facebook, I have a handful of folks tagged, starred, liked, and otherwise marked so that Ye Olde Algoythms of Science can understand that updates from them are important, man.

And yet, I routinely miss updates from those people.

As in, multiple times a day.

Today was particularly bad, as the top post in my news feed is now somewhere around 16 hours old. Whereas I usually see 20-30 new posts per hour during the day, for some reason today, I'm seeing a tenth of that.  Folks are still posting - I'm just not seeing it.

I swear that Facebook must intentionally run their internal network with the crappiest UDP implementation they were able to hack together over a drunken weekend back in '03.

Posted by Samrobb on 7/13/2016 No comments:
Email ThisBlogThis!Share to TwitterShare to FacebookShare to Pinterest
Labels: Personal, Snark, Technology 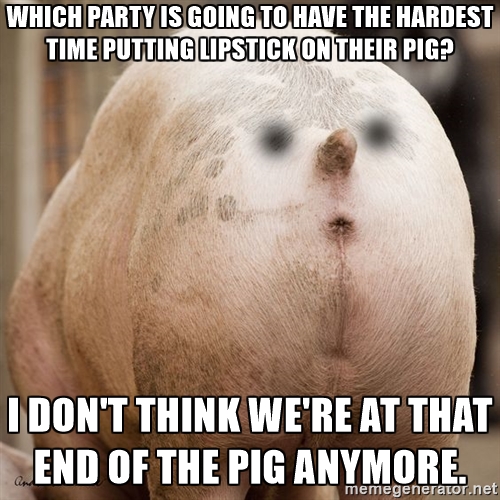 Posted by Samrobb on 7/05/2016 No comments:
Email ThisBlogThis!Share to TwitterShare to FacebookShare to Pinterest
Labels: Politics, Snark

I wish I could claim this as my own, but it was part of a conversation between two friends on the Book of Faces:

Q: "Our 2016 presidential election. Which political party is going to have the hardest time putting lipstick on their pig?" 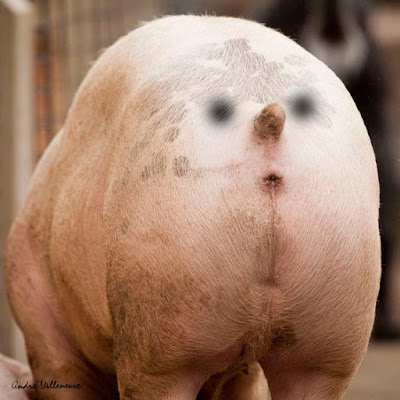 Posted by Samrobb on 7/05/2016 No comments:
Email ThisBlogThis!Share to TwitterShare to FacebookShare to Pinterest
Labels: Politics, Snark

Looking Forward To The Third Party In The Debates!

No, not the Libertarians - though I have hopes for that, as well.  But according to Stephen Colbert, "A Giant Meteor Hitting Earth" Is Now Polling at 13%.

If we can get the SMOD polling at 15% or better, it gets included in the presidential debates!

Moderator: "Next question. Sweet Meteor of Death, could you explain your stance on Social Security reforms?"

SMOD: "Well, Tom. I plan on dealing with the Social Security solvency issues by crashing through the atmosphere, impacting the earth, and plunging the world into a new era of death, destruction and dystopia as humanity struggles to remain alive."

Moderator: "... wasn't that your answer for the last three questions as well?"

SMOD: "Absolutely! Why mess with a winning strategy?"

Moderator: "Do you really think the American people will go for your 'Death, Destruction, Dystopia' message?"

SMOD: "Tom, allow me to point out that just one of the many benefits of my D3 agenda is that not only will neither Trump nor Clinton be president, there is actually an excellent chance of both of them dying horribly."

Moderator: "Definitely something that weighs in your favor, then."