WAPs I Have Known

Recently, things worked out such that I was in the car, on my laptop, with my wife driving. As we went down the road, I saw wireless access points come and go. In the space of about two miles, we saw around 3 dozen APs, with the following results being fairly typical: 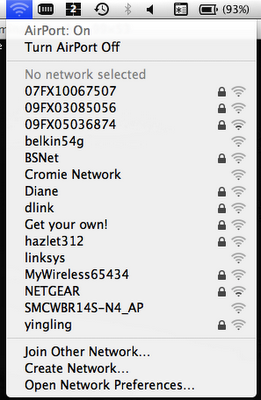 The number of secured wireless networks makes feel all warm and fuzzy :-)
Posted by Samrobb on 1/31/2011 No comments:
Email ThisBlogThis!Share to TwitterShare to FacebookShare to Pinterest
Labels: Pittsburgh, Technology

Speaking Truth to Power, Yo

Andrea Harris on the senselessness of parades, via Dustbury:

When I am dictatrix of the world one of the things I will abolish is parades — except for military parades after a successful war (I assume there will be a few of these until I have managed to subdue all of Earth to my will), and Shriner parades. Because old men in fezzes driving around in tiny clown cars will never not be awesome.

Posted by Samrobb on 1/31/2011 No comments:
Email ThisBlogThis!Share to TwitterShare to FacebookShare to Pinterest
Labels: Snark

"Stupid is as stupid does."

First, we have representative Duncan Hunter of California introducing a bill to delay DADT repeal.
Next up, we have representative Jim Jordan of Ohio looking for a D.C. gay marriage ban.
Now, we have representative F. James Sensenbrenner of Wisconsin pushing for regulation requiring ISPs to record user's data.
Edit: Just after posting this, I find out via Brian Dunbar at Space For Commerce that Senator Susan Collins of Maine has re-introduced legislation to implement an internet kill switch. Because in light of recent events in Egypt, an internet kill switch looks just so very cool, don't you think? All the pseudo-democracies are doing it!
All fine members of the GOP. Wonderful! As pointed out in American Digest:

"Doofus Republicani: The only species that endangers itself."

Gentlemen and ladies of the newly elected Republican party in Congress. Please, let me address you with the civility and gravity that you deserve:
You are acting complete and utter idiots.
NOW STOP SCREWING AROUND AND
DO THE JOB WE ELECTED YOU TO DO.
I swear on a stack of Bibles, that if we were to let some of you wander out into the rain by yourselves, you're so unbelievably stupid that you'd freaking drown yourselves. If you were in a burning building, you'd stop to complain about the paint job. You probably get confused when someone compares your activities to rearranging the deck chairs on the Titanic, because you feel that deck-chair placement is a vitally important issue.
Do us all a favor, for the love of sanity. Scrounge up some petty funds cash from your office, go down the the local 7-11, and when you get there, buy yourself a freaking clue, m'kay?
There's about 6 bajillion things you could be doing to improve the current situation via-a-vis the economy, the jobless numbers, the hostile small business environment, and the other innumerable acts of aggressive stupidity that have been inflicted upon the American people in the past two years. That stuff there? Yeah - you see it?
FIX THAT STUFF.
Seriously, folks. Jobs, economy, security, spending, reducing the size of government. If what you're talking about isn't directly and fundamentally connected to one of those issues, shut your freaking pie hole. If it's still an issue in 3-4 years, and all of the urgent and significant problems have been taken care of, then we can talk.
Until then: jobs, economy, security, spending, size of government. That's all I want to hear from you. Just do your job and show me that you're not a bunch of drooling morons who should be replaced the next time I have the chance to get near a ballot box.
Posted by Samrobb on 1/31/2011 No comments:
Email ThisBlogThis!Share to TwitterShare to FacebookShare to Pinterest
Labels: Politics, Snark

A delicate flavor, with just a hint of snark...

OK - maybe more than a hint. Tam answers the question, "In what situation do you think you would need a 30 bullet magazine clip?"

In only marginally related news, Fred Pohl closed down the recent gun discussion thread on his blog. In the wake of the Giffords shooting, in a post titled "Mass Murder Courtesy of the NRA", Fred asked any NRA supporting readers, "Are you proud of yourself today?" In his follow-up post, he describes the resulting comments as "vigorous" and says, "I think there’s a lot to be learned from the discussion, and so I’ll try to come back to it soon."

Yeah... right. I don't think I'm going to be waiting with baited breath for you to "come back to it soon." When a conversation opens with accusations of accomplice in the murder of multiple human beings, and ends with the phrase, "I think there's a lot to be learned from this discussion"... I don't think that there's really much of a chance that the topic will be re-opened anytime soon. I may be wrong, but my personal experience is this is the "feel-good" way of completely changing the topic of conversation... and oh, would you look at that!

Lori Ziganto gets to the heart of the matter over at Red State:

My rights as a woman are not predicated on a legal ability to kill my own children.

Now, I'd classify myself, politically, as a libertarian. Despite this, I do very much believe in natural authority, in the Romans 13 sense - "1. Let every soul be subject unto the higher powers. For there is no power but of God: the powers that be are ordained of God."
I very much suspect that the two positions are not mutually exclusive, though I'm pretty sure that if I fumbled around and tried to explain it properly, I'd just end up sounding like a blithering idiot.
And yet, I'll try.
Aretae restates his argument as "There are exactly two interactions in the world... freely chosen and thug-based." In terms of the Christian faith, so long as you steer clear of the Calvinistic view of election, then I think you can argue that submission to the authority of God on the part of a believer is entirely consensual - consider Romans 12, for example.
Now, granted - it is very much a "freely chosen" interaction on our part only because God has allowed it. The fact remains, though, that even though there is no comparison between myself and the creator of the universe - this is not at all a "freely chosen" interaction between like parties! - it is still a choice. The essential question of Christianity is that God Himself, in eternity past, made the choice to die for my sins. How I freely choose to react to that action on the part of God is my choice alone.
More later, I'm sure. Suffice it to say that, at least at a first glance, I don't consider Christianity and libertarian politics to be necessarily exclusive. As such, I'm interested to see where Aretae will take his initial argument.
Posted by Samrobb on 1/17/2011 No comments:
Email ThisBlogThis!Share to TwitterShare to FacebookShare to Pinterest
Labels: Politics, Theology, World View

Open at the moment

Just in case you ever wondered - here are my current browser tabs:
... and that's not counting a couple of dozen others I've waded through today already.
Posted by Samrobb on 1/06/2011 No comments:
Email ThisBlogThis!Share to TwitterShare to FacebookShare to Pinterest
Labels: Misc

Over the past couple of years, I've managed to accumulate a small pile of non-fiction that looked interesting to me. "Hmmm," I'd say, "this sounds good. 50% off, too? Wow! I'll take it! I'm sure I'll get around to reading it. At some point. Really!"

Well, that time has come. Thanks to a recent reorganization of the household (moving my eldest daughter into her own room), I ended up with all my "get around to it" books in more or less one pile. A bit of shuffling, and voilà! - what follows is my proposed (non-fiction) reading list for 2011. A total of 25 titles, or one every couple of weeks this year. That's a pretty good clip - we'll see how well I manage it.

As far as fiction reading is concerned, I resolve to continue reading whatever catches my fancy. I'm currently working my way through Glen Cook's latest book in his "Instrumentalities of the Night" series ("Surrender to the Will of the Night"), and I'll probably start in on his "Darkwar" trilogy after that's complete. I also resolve to continue my habit of voraciously devouring anything by Jim Butcher, Charles Stross, Jack McDevitt, Steven Brust, Lois Bujold, Dan Abnett, Sandy Mitchell, and any number of other authors who tickle my fancy.

Pastoral (9)
Historical (8)
Personal (4)
Adoption (4)
Posted by Samrobb on 1/04/2011 No comments:
Email ThisBlogThis!Share to TwitterShare to FacebookShare to Pinterest
Labels: Personal

Making public new year's resolutions seems to be all the rage these days. Far be it from me to not follow after all the cool kids.
In keeping with my long standing #1 new year's resolution - "Always Procrastinate" - my resolutions will, of course, be coming a bit later than the new year.
I'll justify it by saying that I intend to sift through a stack of non-fiction that I've been meaning to read, and really, I need to get that lined up and in order before I can commit to my 2011 reading list. Really.
Posted by Samrobb on 1/03/2011 No comments:
Email ThisBlogThis!Share to TwitterShare to FacebookShare to Pinterest
Labels: Misc
Newer Posts Older Posts Home
Subscribe to: Posts (Atom)