In Communist Cuba, Bingo gets YOU!

One (1) Internets to the first person who identifies a single article that fills the board. 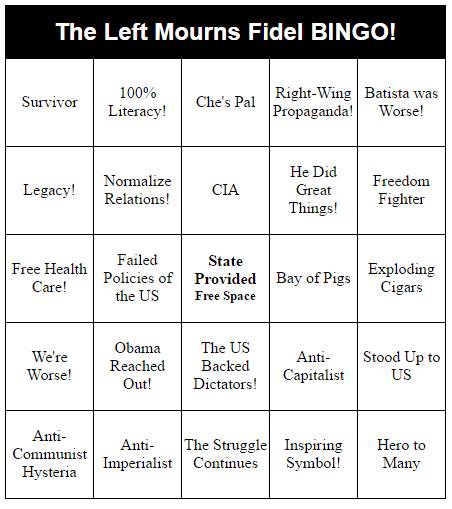 Posted by Samrobb on 11/26/2016 No comments:
Email ThisBlogThis!Share to TwitterShare to FacebookShare to Pinterest
Labels: Politics, Snark

Since I've got a novel in flight, as it were, I decided to officially participate in NaNoWriMo this year.  If you're so inclined, you can find me registered here.

At the start of NaNo this year, I had about 30k words written.  I figured participating in NaNo would be a great way to push myself to bang out another 50k words, which should (hopefully) get me close to something that might resemble a finished story.

First week went really well.  I was more or less on track, and ended up about 1k words short of my goal.  Not to bad, considering that means I'd written 10k words (woohoo!) even in the face of having to take a couple of nights off for various activities, including our annual bonfire.

Then, of course, the election hit.  If you've read my blog for any amount of time, you can probably guess that following the election coverage and the aftermath was a bit of a time sink for me.

Just as that started to settle down, I got hit with a head cold, which pretty much left me wishing I could just sleep for 48 hours.  I actually gave that a pretty good shot over the weekend.

None of that was especially conducive to the idea of "butt in seat, writing".

So as of this morning, I'm currently sitting at 15k words worth of progress on my NaNo goals, which is around 8k short of where I want to be.  Not bad, but I can do better.

One thing that I've learned from participating in NaNo this year: writing and editing have to be separate activities for me.  When I started, I was researching and editing as I went, which meant that I was managing to write about 500 words/hour.  Overall, they were pretty good words.  Nice.  Polished.  They pretty much said what I wanted to say.

For NaNo, I've had to move to just writing - I pay attention to my use of the backspace key, and unless it's to correct a word or a misspelling, I force myself to skip it.

Sentence seems a bit awkward?  Ignore it - I grok what the meaning was, I'll clean it up later.

Need to know what type of four passenger plane a private pilot might own and fly?  Just make a note, come back and fill in the details later.

Can't quite figure out how to join these two passages?  Eh.  Make a note of that, forge onward.

Stalled wondering where this scene or conversation will go?  Switch over to something else.  Write a snippet that may or may not fit in elsewhere. 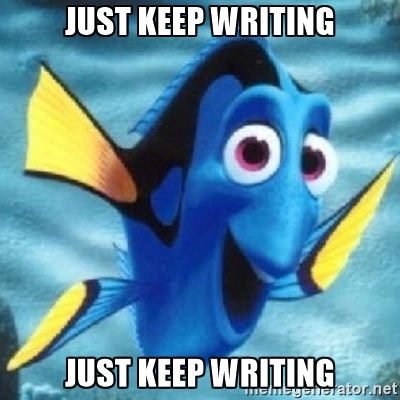 Just by making that effort, I've managed to come close to doubling my output - I can manage about 1k words per hour.  It's difficult to sustain that pace - I can do 2-3 hours before I need to take a break and recharge - but it has definitely been worth it.  My prose isn't as complete or as polished as I'd like, but the important thing is that the story is progressing.  I can see things moving,  What has been living solely in my head for the past year is now making it on to the page, and even if it isn't as nice as I want to eventually make it, it's there.

What's even better, I think, is that getting my editing brain out of the way is helping me to realize things about my characters that I didn't even know were there.  My writing brain says, "say this", my hands go tappity-tap-tap, and I think, "Where did that come from?  I mean, it makes sense..." and now I have a reason why Coy's a flirt, why Mike is willing to give Alexi the benefit of the doubt, why Amy is unwilling to just pack up and go home instead of going on a wild goose chase down to North Carolina with a couple of folks she just met.

Long story short: NaNo is helping me, not just in terms of discipline in time spent writing, but in learning how to write in a way that I've not ever really tried.  And I'm kind of excited about that!
Posted by Samrobb on 11/14/2016 No comments:
Email ThisBlogThis!Share to TwitterShare to FacebookShare to Pinterest
Labels: NaNoWriMo, Personal, Writing 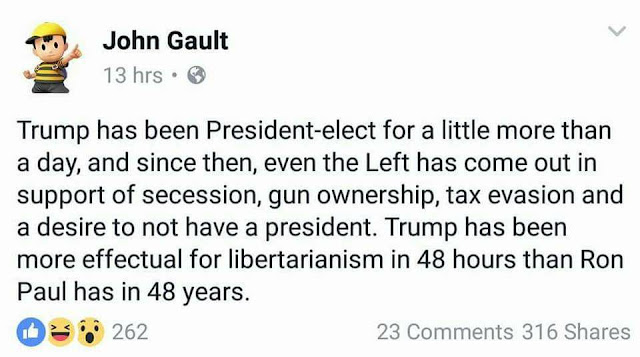 Posted by Samrobb on 11/11/2016 No comments:
Email ThisBlogThis!Share to TwitterShare to FacebookShare to Pinterest
Labels: Politics, Snark 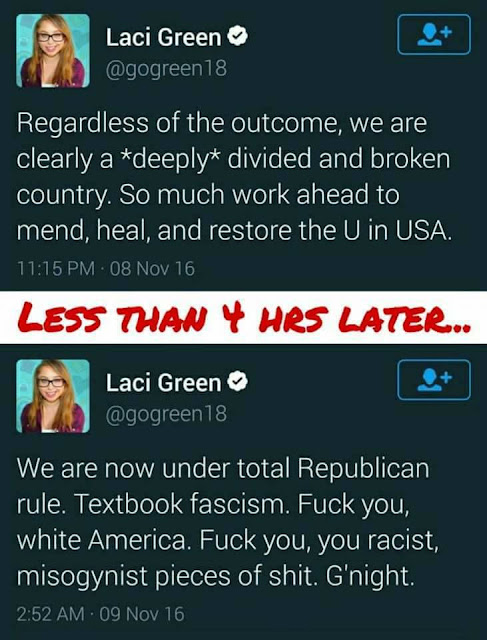 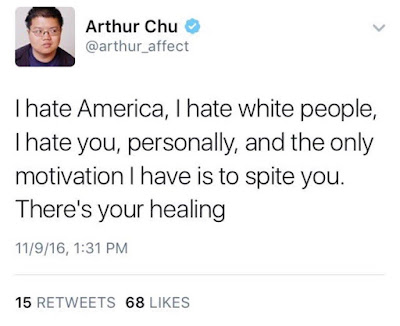 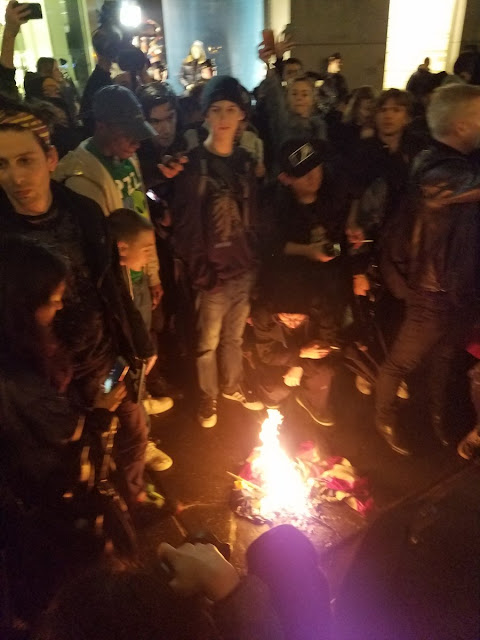 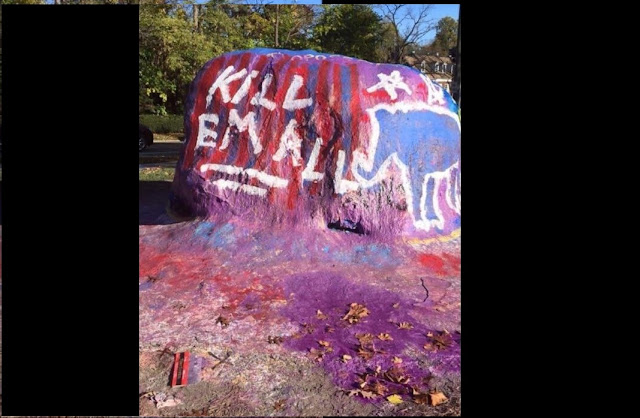 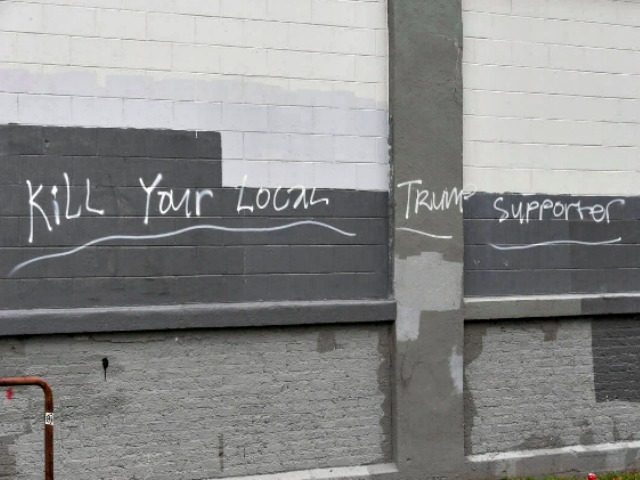 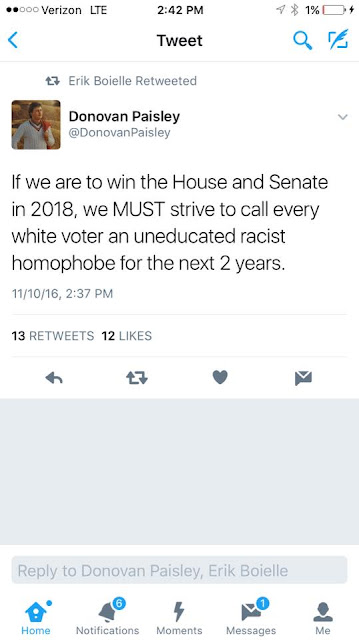 Posted by Samrobb on 11/10/2016 No comments:
Email ThisBlogThis!Share to TwitterShare to FacebookShare to Pinterest
Labels: Mindless Jerks, Politics

I Just Winged It

I somehow managed to miss the article that Slate put up that answer the question of How Do I Explain to My Daughters What Happened in This Election?

Which meant that, lacking their sophisticated guidance, I had to fly by the seat of my pants and pretty much wing it...

I think it went pretty well.
Posted by Samrobb on 11/10/2016 No comments:
Email ThisBlogThis!Share to TwitterShare to FacebookShare to Pinterest
Labels: Politics, Snark

QOTD, and some advice for the Democrat Party...

"Next time you want people to vote for a lesser evil, make sure they actually have reason to believe it's the lesser evil."