Being The Friendly Chap That I Am

I came across a really interesting article about Israel: their start-up culture, and how that is influencing and strengthening their growing relationships with China, India and other non-Western countries.

When I tried to pull a quote from the article, though, some javascript snippet asked me if I wanted to license the content.

I wanted to exercise fair use, quote enough of the article to give it some context, and then direct readers to your web site. Which would have increased your page views, perhaps provided a small bump in your revenue stream, and possibly gotten you some new readers.

But apparently you're not interested in that. Being the friendly chap that I am, I will honor your unstated wish to become an abject failure, and ignore you.

Posted by Samrobb on 3/24/2015 No comments:
Email ThisBlogThis!Share to TwitterShare to FacebookShare to Pinterest
Labels: Blogging, Economics, Fail, Mindless Jerks

“A human being should be able to change a diaper, plan an invasion, butcher a hog, conn a ship, design a building, write a sonnet, balance accounts, build a wall, set a bone, comfort the dying, take orders, give orders, cooperate, act alone, solve equations, analyze a new problem, pitch manure, program a computer, cook a tasty meal, fight efficiently, die gallantly. Specialization is for insects.”

Eliminating "die gallantly" - because who cares, after that? - leaves 20 items on the list.

Which puts me batting .850 on Heinlein's Human Being scale.  Well... let's say .875, with half credit for the sonnet bit. I did write some pretty bad poetry in high school, and Eldest Daughter and I take delight in coming up with parody song lyrics.  That has to count for something, I would think.

I will leave it as an exercise to the reader to determine which of the other checkboxes I have yet to tick off.
Posted by Samrobb on 3/16/2015 No comments:
Email ThisBlogThis!Share to TwitterShare to FacebookShare to Pinterest
Labels: Personal, World View

In Which I Announce My Candidacy

Driving in to work today, I heard some folks discussing the 2016 Democratic presidential primaries. Overall an interesting discussion, but one thing that stuck out to me was the mention of Richard Gephardt as a potential candidate on the Democratic slate.

Seriously, folks.  If they're even thinking about Dicky G., then I figure the bar has been set pretty low indeed.  Possibly - just possibly - low enough for a no-name, random computer programmer from Pittsburgh to throw his hat into the ring.

So, consider the hat thrown.

Not for President, though.  It looks as if Carly Fiorina is "running" for the nomination on the GOP side with the hopes of getting picked for the VP spot on somebody else's slate.  Now, that is more my métier.  While I may lack any executive experience whatsoever, I figure that given the (air quotes) "responsibilities" (end air quotes) of the job, I could Veep just as well as anybody else, and probably better than a lot of other potential candidates.

I did mention the bit about a "low bar" already, didn't I? 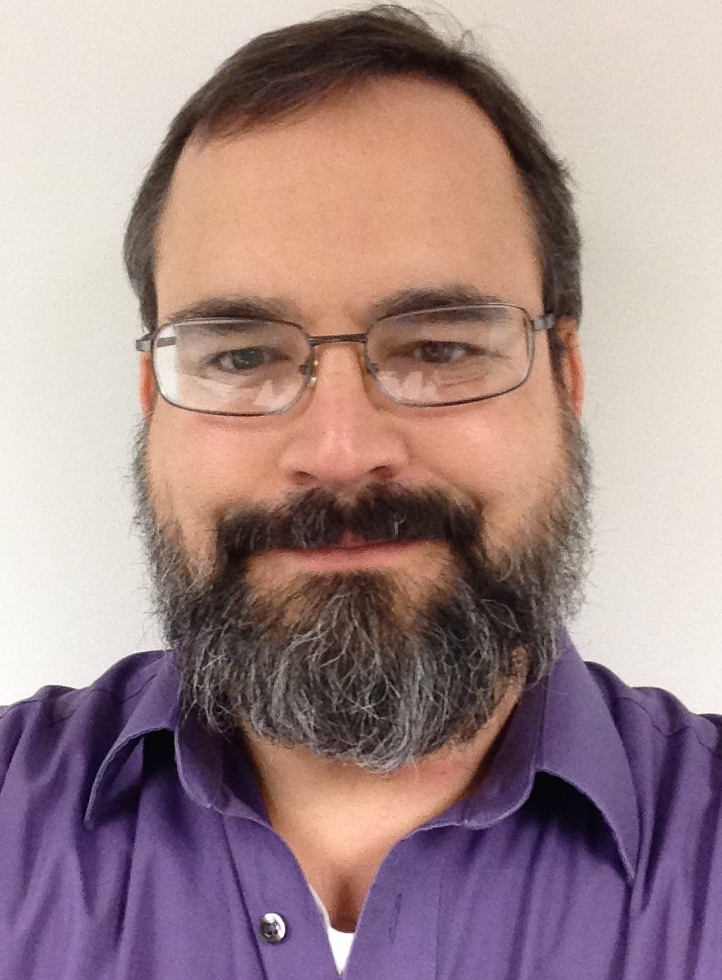 The candidate himself, sporting his signature
rugged good looks.  It has been 100 years -
give beards a chance!

For all you potential presidential primary candidates (Republican, Libertarian, Constitutional, or otherwise) - here's the pitch.

I'm a libertarian (and a Libertarian as well, to boot).  I dislike government in general, generally despise politicians, and otherwise hate politics.  Which may make you wonder, "Geez... if that's the case, Sam, then why in the world would you want to be Veep?"

First, as I mentioned previously, the bar for the position is at an all-time low.  I can respectfully and honestly assure you that I am capable of fulfilling the role and meeting the responsibilities of the Vice President of the United States of America (i.e., "showing up").  Moreover, I can do so without groping any women or making off the cuff racist comments.  As a bonus, I am generally capable of avoiding sticking my foot in my mouth and saying incredibly, obviously stupid things.

Second... well, if you are going to fight a war, you go to where the enemy is.  The way I see it, the enemy in this case (government, politicians, bureaucrat, etc.) are pretty much all in Washington, D.C. Since I consider most politicians to be self-serving parasitical barnacles on an otherwise productive society and nation, you can be sure that I will look at any and every situation with a cynical and snarky eye, and let them have it with both barrels when I think they are lying (i.e., when they open their pie-holes).  If nothing else, I figure I can provide enough comments, quips and other non-female groping media fodder to keep the Fourth Estate hopping and off your back while you do important stuff.

Finally, it looks like this will be one of the few jobs in the country with a decent health care package come 2016. I figure I owe it to my family to at least take a stab at it.  Plus, you know if you take me on that I won't be looking for a better job any time soon.  Unless that résumé to Blizzard pans out, I mean.  A man's got to keep his options open, you know?


I am happily married to an amazingly wonderful woman.  No affairs, and absolutely no desire to ever have an affair, as the Lovely Mrs. Robb is a practicing marital artist and a crack shot.  Plus, you know, there's the whole "I love you, 'till death do us part" thing that I take seriously.

I graduated from Carnegie Mellon University with a bachelors' degree in Metallurgical Engineering and Materials Science on a ROTC scholarship - serious geek cred, obviously.  After graduation, I went on to spend a few years as a junior officer in the United States Navy, so there's your military connection right there.  Then I returned to Pittsburgh and started a new career as a computer programmer.  More geek cred!  For the past 15 years, I have worked for numerous software development companies, mostly start-ups, and mostly with open-source software.  Oh, yeah - did I mention that I'm a geek?  Just ask my daughters.

Speaking of which:  three daughters, all adopted from China, all drop dead gorgeous.  (Potential suitors, please recall what I said earlier about the lovely Mrs. Robb and her martial arts and firearm skills.)  So, hey.  Foreign relations bonus, right?  Plus I have had extensive contact, personally and professionally, with many Canadians.  As a result, I am aware of the many noble traditions and practices of our neighbors from the Frozen North - and they have accepted me as one of their own, eh?

I'm a practicing Christian of the Baptist stripe, a Sunday school teacher and a lay preacher, all of which means exactly bupkis as far as politics go, really.  (Well, now that I think about it, my teaching experience is with first and second grade boys, which in hindsight is probably pretty good training for dealing with your average member of congress.)   In any case, as the Veep is not directly responsible for enforcing the law of the land, it shouldn't matter one way or another.  That said, should I ever end up in a position where I am doing so, I hereby solemnly swear to you before God that I will uphold the law, because that will be my job.  Pretty friggin' lousy that current circumstances make me feel the need to even make that promise, but there you go.


My attitude towards the government in general can be summed up by KYFHO.

I have strong opinions about spammers.  First offense, fine 'em.  Second offense, tar and feather them.  Third offense, set them adrift in shark-infested waters after rubbing down their life raft with raw meat.


Kind of like the whole Constitution thing.  Except for the commerce clause, which has been so thoroughly and repeatedly abused that it should be under a suicide watch.  Oh, and the whole copyright thing, which... look, don't even get me started, OK?  Just know that it's time for the Mouse to face up to reality.

First Amendment? The way to fight speech you don't agree with is with moar speech, dude.

Second Amendment?  The Lovely Mrs. Robb and I both have our carry permits, and we own enough shotguns, rifles and pistols to outfit a couple of infantry squads.  'Nuff said.

Third Amendment?  This is like the canary clause of the Constitution.  If we have to start debating the Third, that's when you will know that we are well and truly and royally screwed.

Fourth Amendment?  Oh, hey.  Wait.  Do we still have that?  I was wondering.  Maybe time to dust it off, re-read it, grab some tar and feathers, and go to town?

The war on drugs is a rotten, stinking mess.  Not a big fan.

Bureaucracies?  Nuke 'em until they glow, then shoot them in the dark.  Start with the department of Education.  We did without one for over 200 years, and honestly, we can do just fine without them again.  In fact, let's start with 2015 and work our way backwards and re-evaluate every department. Close some, reduce some, merge others.  We can make them fight it out, Hunger Games style.  That should be entertaining.

Entitlement spending?  Man, we have got to do something about that.  As a friend points out, the government is essentially a heavily-armed nursing home at this point.  While I am enthusiastically in favor of the "heavily armed" part of that equation, drastic changes are needed, and soon.

Immigration?  Secure our borders, then streamline and expand immigration and re-emphasize naturalization. Actively recruit individuals to immigrate.  I want to see a country where we have more INS agents, working to help bring new citizens into the fold, than we have IRS agents.

Speaking of the IRS.  Flat tax, 15%, with only individual deductions.  Simplifies everything, and we can reduce the size and scope of the IRS.  Wait, scratch that.  They're the best way to train all those new citizens that the government is not here to help them.  We'll keep them, just pull some fangs and make tax time as simple as possible.  Simple means profitable, people.

Foreign Relations?  Forget "nuanced".  The world knows that we're painfully direct, rudely blunt cowboys.  Live up to that, and be the be big damn heroes we need to be.  I want the world to know that we are the good guys; that we are always there to help if there is a disaster; and that if someone crosses our line, we will turn them into dog chow without remorse.

Anthropogenic Climate Change - Are we affecting the climate?  Duh.  Yes.  Are we noticeably affecting the climate, compared to, say, the big ol' ball of flaming hydrogen that sits at the center of the solar system?  Not so sure about that, but I suspect the answer there is "no".  To figure that out, though, we will need...

Science funding?  Moar, please.  No problem at all with science.  Once we dig into the war on drugs and axe a few thousand Assistants to the Undersecretary of the Joint Task Force of the Department of Reducing Redundancy Department, just imagine how much we will have to put a man on Mars.  I propose we have a lottery on who to send.  If it's Chris Matthews, I'll personally chip in $20 just to be rid of the blithering idiot.


If you're a potential candidate and you're interested in having me for your running mate, leave a comment and I'll get back to you as soon as I can.  Unless you're a complete dork, in which case I'll probably ignore you.